I saw the incredible documentary “Babies” in the theater back in 2010. Four years later, I got married. Last night I watched it on Vimeo for the first time since then and saw entirely new things. I saw the deliberate connections the director made between the babies environment, their socialization and the ways in which they learned to behave and make choices, the ways in which they developed a sense of self. And I love it even more.

It is incredible to see how highly intelligent human beings can be who have only been on earth for a few months, because babies take in information so rapidly and integrate ritual, tradition and routine like sponges!

When I first saw “Babies” I did not recognize the immediate connection made between the first scene of Panijao and her sibling from Opuwo, Namibia, pounding rocks with smaller stones and the cut to several months earlier before Panijao was born where her mother used a stone to pound a red pigment on a rock in front of Panijao, while she was still in her stomach!

That blows my mind.

The four babies chosen to be documented from Africa, Japan, Mongolia and America, all process the information of their varied surroundings in unique ways. Observation, imitation, defense, survival, affection, play, the passage of time, rest, are all learned in the formative first few months of their lives. The emphasis in this documentary is on the world of the baby, an observation not only of the ways in which they navigate a world that is completely new to them but a body that is new them as well.

Bayar gave me horrors. But that wasn’t his fault. His brother clearly had issues with his presence and tried his best to torture, harm and get rid of him. LOL! But that’s common with older siblings who are newly displaced by younger ones. Bayar also seemed to be alone a lot. I’m not sure why but I’m guessing his parents were working a lot. He’d be crawling around in the dirt with no diapers in a wide landscape, sitting in the back of a truck, sitting in a basin. He interacted a lot with animals and his environment. He took a few unattended tumbles but he was okay. Babies are stronger and more resilient than we imagine.

Mari was hilarious. She seemed to have arrived with a distinct personality fully intact. She was apprehensive, impatient, careful. For me the all time best footage of Mari were her dramatic series of histrionics in reaction to her failure to keep a circular wooden peg inside a wooden circle. LOL! She was so stressed out it was like watching an adult react to a major challenge. 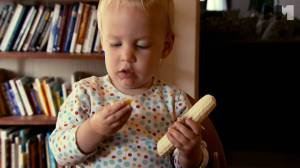 My two favorite moments from Hattie’s early life were when she peels and eats a banana and hands her dad all the skin and the tiny piece at the bottom of the banana, which I never liked as a baby either. Does anyone? She’s just like, no, I don’t need that. The other is the footage of parents and babies sitting in a circle singing about mother Earth. Hattie’s father is there with her sitting between his legs and raising his arms in unison with the other parents. Hattie gets right up, walks across the floor and up to the door to try and get out. Who knows why but she is having none of it. She’s not mad or hysterical. She’s just done.

Panijao’s footage was particularly enjoyable to me. Though she also experienced her own share of growing pain, she also seemed to be learning and advancing more and more each time we saw her. She often seemed to be happy and joyful, receptive and embracing of her surroundings and familial connections. I also noticed her waist beads this time. She had waist beads even as a little bitty thing and they change when she’s older and walking around. I was never really worried for or about her. I just enjoyed watching her development.

Watching her fight off sleep in one scene was the most hilarious thing but of course the hardest moment to top was the scene that opens the film where she and her sibling are sitting together pounding rocks and she decides to grab a bottle that belongs to him. He takes it back, she bites him, he gives her a few good raps and grabs her by her necklace before returning to his work like nothing ever happened. It is the most hilarious thing in life. There is nothing random or vague about their exchange. They are intelligent, dexterous, strong willed and curious and although they have not fully mastered language, they communicate their desires with perfect clarity. Babies are just brand new people after all.