She talked in the interview about the role laughter played for survivors of the Holocaust, laughter in the darkest, the most terror filled times, “Laughter in hell.” This notion grabbed me and I took note of the times when laughter in my life during rough times (many of which I still wading through) have brought me and people around me to laugh totally at random. Marginalized oppressed people all over the world relate to this kind of laughter, the kind that pushes up defiantly through the ugliness and pain of human injustice and disparity and explodes into spaces blanketed with fear, sadness, hopelessness and depression like light breaking. Perel talks about laughter as autonomy in dark times when one feels that the sense of control over everything else has been lost.

The affirmation of this through Perel’s study touched me deeply. It confirmed something I had always suspected about why laughter is so important to me. There is a sense of unabashed freedom and bonding, a collective agreement, a belonging when we laugh together and even alone. There are times, in my therapist’s office when we will both share bursts of unexpected of laughter, sometimes moments after I have been crying. And that laughter…man, it makes me feel like no matter what, I still have the energy of life in me, that I have not shut down completely, that light can still enter and will again and again if I hold space for it. And I hold space for laughter in my life actively. I hold space for laughter and to make people laugh and to laugh at myself most of all.

I was scrolling through IG a few days ago when I saw this quote by Serena for the press conference after she lost to Halep in the Wimbledon Finals posted by USTA.

I had watched that entire match and the press conference afterward with my mom and I saw right away how they left out the only words in that quote that I had hung on to. The complete quote is as follows. 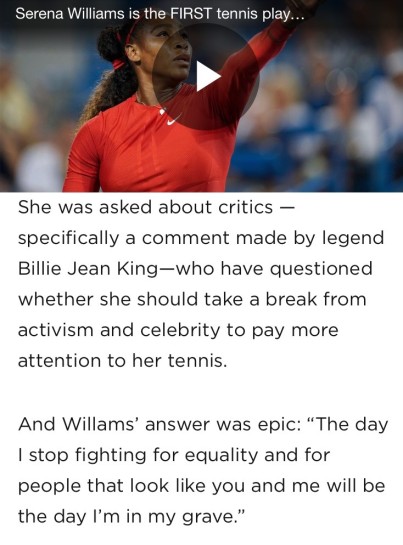 I knew even then that when Serena said made this statement that it was still vague enough for the media to manipulate and project it’s agenda onto. But wow, they just went ahead and took the whole damn thing out. When Serena said “People that look like you and me…” I feel like she was doing that old double consciousness balancing act that still haunts many of us as Black people to this day. Serena’s indications about people who look like her and the reporter (I’m assuming she wasn’t white?) were specific and yet leaving enough wiggle room for the customization of truth that is written by Whiteness. In fact, every conference I’ve watched Serena give during this Wimbledon tournament has made me wonder what anger, frustration and irritation lay unsaid inside of her as she appears to maintain a lo-key, laid back, non-reactive and non-threatening facade, the anti-thesis of her behavior during the now infamous Osaka match.

My husband made the interesting point that the media’s uproarious and favorable acceptance of Coco Gauff has taken a lot of pressure off of Serena this year. If not for Coco she might have had to withstand harsher focus from the media. It’s ironic really how Serena and Venus have clearly opened the doors for young Black female tennis players like Sloane and Gauff, who seem to be getting the kind of measured and unbiased treatment from the press and media which the Williams sisters were never afforded because of blatant racism. Its wonderful, strange and a bit concerning to me (double consciousness again) to watch Coco respond to the press by just being the young girl she is. When I think of that terrible “interview” Venus had to endure with that White a-hole who probably called himself a journalist when she was just 14 years old, I cringe. I know this is an experience like many others the Williams sisters endured which informed the women they are now, experiences they have had to surpass and transcend so that others who look like them might not have to. And although the Williams are revered as top tennis champions and hold a place in history as Black women who have persevered oppression and racism in the sport, the thing is, it’s not over. It’s not over and they know it in ways Sloane and Gauff may never know. That’s how it works after all.

I studied Serena’s face when they dared to ask her how she felt her stamina compared with Roger Federer’s considering their advanced ages and I longed for the equivalent of the Key and Peele Obama translator sketch  ; a Black woman with nothing to lose could stand beside her and translate what Serena said unapologetically in explicit language that Black folk would understand and make racist White people uncomfortable with their implicit role in her frustration.

Muthafucka, Federer ain’t had to push out an entire fucking human being out his body and then almost die afterward! Who the fuck do you think she is? She slayed the Australian Open while she was pregnant bitches! Why not ask Federer if he thinks he could have pulled that shit off?

That’s what my imaginary Williams translator would have said if she was there with Serena that day. She would have also said the words Black women, not “people who look like you and I.” But fuck if I don’t understand why she didn’t say Black women. She would have to deal with all kinds of stories calling her angry and asking why everything has to be about race…

So after months of thinking about it and agonizing over it, I finally shaved my head  bald a few weeks ago. Though I do feel super liberated and in love with my bald head, I’ve had my share of insecurities, particularly since I’ve been challenged with some hair damage over the years but I’m kinda into moving past that right now and healing rather than harping. It has helped a lot to have the full support of my husband whose clippers I used to shave my head initially. He finished it off in the back and then smartly suggested that I go to the barbershop to have it lined up and neatened and stuff.

Shout out to Denny Moe’s in Harlem for never making me feel weird, awkward or shamed for coming in to cut my hair short and always making me feel welcome because I have heard some bad stories about the terrible treatment of women of color going to barber shops to have a big chop done. As if we don’t have enough problems!

Here are some things I have experienced since I shaved my head.