Bop bops, love bunch, schwoopy poopy…I call my cat a lot of cutesy names. Sometimes I just call him noises. Like I just make noises at him and cuddle him against his will, though I’ve been trying to back off lately. I don’t think anyone really truly understands cats the way they do dogs. Because they evolved as solitary hunters, they don’t express a need for companionship or affection in the same way as canines do. And I think I like this because I have a bit aversion to overly clingy beings. So I get to be the clingy one with him because, well, I’m human and bigger and in charge. I think we have our ideas about what cats want, and why and we’re usually way off base. But here’s what I can tell you so far about the cat we’ve named Jet who has been living with us since August 2015.

When I first picked him up at the YMCA shelter and put him on my shoulder, he was purring like a loud motor. He was curious, cautious and easily distracted. And my heart did a million unrecognizable flips. He hid under the bed for like a day when we got home with him which didn’t surprise me. Cats are not fans of change. My family had one when I was a girl and when we moved from Brooklyn to the Bronx she hid in the ceiling of the basement (don’t ask how) for days. She came out when she was ready to.

Jet is six months old and still social at this point. People come over and he wants to be around. Anyone, friends, meter reader, superintendent. He wants to sniff around them and walk around them, be around. He has a nerve as all cats do to want to be in my space but not necessarily engage with me. In fact the only time I really know that he actually wants to engage with me is when he meows. Meowing is something I have learned that cats only do to communicate with humans. Cats don’t meow among themselves. So when Jet meows, I know he either wants to get into a room I’ve locked, wants to be picked up so he can knead his paws and claws into my flesh or is frustrated because he can’t get some mysterious piece of something out from under a piece of furniture or the ball in his box is being audaciously non-cooperative .

His favorite toy (he has a collection) is the feather teaser and I have a lot of fun using it to play with him. I enjoy seeing how agile he is, how improvisational and energetic. I like to see what choices he makes in the way he moves and how long it takes to tire him out as he grows bigger. 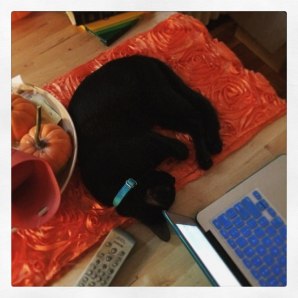 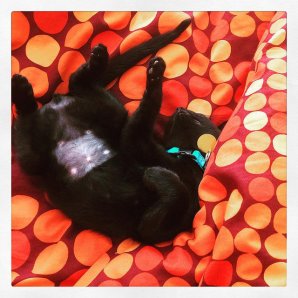 When he sleeps, he sleeps like a log. A cat’s sleep schedule(16-20 hours a day), particularly when it feels safe, is pretty serious. Last night he went under the bed, sat in one of my shoe boxes and slept for like 3 hours straight. But I have never ever in my life, except in online photos, seen a cat sleep with such sprawling abandon. My husband and I laugh at him all the time and send one another pictures of him during the day if the other happens to be home with him. His sleeping positions range from the hilarious to the poetic.

Jet hates taking pictures. This I know. When he knows I’m focused on him, he looks away. He doesn’t give care at all about messing up my shots Cats are the best at throwing you shady looks when they don’t want to be bothered. I take a bunch of great pictures of him regardless, more than I would ever admit. It’s what I do.

Jet also doesn’t care about television, though I think he is marginally aware when it’s on that it contributes to the general buzz of the apartment when my husband and I are both home. He was mildly obsessed with my laptop for a bit. Whenever I played iTunes he would walk on my keyboard, try to pull off the protector, bite the edges of the screen. I like to think it’s because he hated Drake because that was all I was playing at the time. LOL!

If we lived in a bigger space and had more money, (feeding a pet is not cheap) I would definitely want another cat. Cats are just really calming for me. Cats, doing my nails….walking in 12 inches of freshly fallen snow, all calming. LOL! There is nothing nicer than knowing at the end of my work day, that I’m coming home to my husband and our cat. It’s so corny, I know but I feel like my blood pressure is that much lower because of this cozy routine. And Jet is by no means a cat that is even mildly obsessed with cuddling with either one of us for more than like a few minutes. He’s very deliberate about when he employs touch or the old brush against the leg. But it’s obvious he’s very relaxed around us, he’s bonded to us. He likes us. But I think if he could talk, he would be hard pressed to admit it. Liking us is besides the point. Play time, the next nap and meal time are bigger priorities.