Because I’m in denial.

In 2008 when Obama won the presidential election, my husband and I were living in Harlem and there was dancing in the streets. Dancing, singing, people blowing horns and beating drums. It was a magical moment, a beautiful feeling, surreal almost. It was a wonderful place to be at such a historically significant occasion. He won. We won. 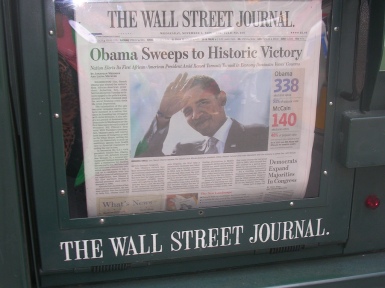 In an album in my flickr account which I titled, “A New Day” are photos from the day my BFF, family friends and I and drove to DC for Obama’s inauguration. It was bitterly cold and we stood for hours but it was all worth it to witness this moment in time. When Aretha Franklin sang, my shoulders shook. The ushering in of more than I could comprehend, the hopes and dreams of slaves and ancestors swept up in the oath of America’s first Black President.

Listening to Obama’s farewell speech last night, there were things he said that made me proud, things I disagreed with, things I’m frankly tired of hearing but more than anything else, I didn’t want it to be the last time I heard him speak as our president. Like the shouting masses in the Chicago crowd, words like last made my heart sink and they echoed my sentiments when they screamed out to him pleading and jeering at the idea that this was goodbye.

When I think of what we have in store with that…person, it’s like a nightmare on the horizon that I cannot comprehend. I have been tuning into all my feel good go-tos in the past week or so. Just listening to music that makes me feel ecstatic and joyous and filled with hope and watching things that make me feel light and childlike. Because in the next four years, feel goods will be a requisite to survival for all people of color. But then again, it always has been for us. That’s how this country was made.

1 thought on “My President is Still Black”