I was up late Friday night doing some work and conversing with Khalilah through Whatsapp. Jay Z’s 4:44 album dropped and she was raving about it. I learned about it from Mahershala Ali as he is featured in a video component of the album. I am a Mahershali Ali Day 1 stan just so you know. That short snippet of him punching a boxing bag with Danny Glover as his coach had me at hello. And then there’s Jay-Z’s lyrics over a laid back and emotionally nostalgic beat.

Letter to my father that I never wrote?

WHAT? Who is not immediately pulled in by that? But when I looked for it on iTunes it wasn’t there, and I learned from Khalilah, that it might never be released on other digital streaming platforms. I grew more and more annoyed with every social media rave review. This shit is really only on Tidal! I cannot begin to explain how frustrating and how dope that is at the same time. So I signed up. It’s the same price a month as Apple Music and is owned by Jay-Z. I think it’s a Boss move. He got my money, and I got an exclusive, powerful, elevated, beautiful, revolutionary and transformative Black experience.

I’m not gonna go into the album right now. I’ve listened to it once and really like it but I still need some time with it. Lets talk about the video for “The Oj Story”and how it gave me everything I didn’t even know I needed or could have in my life like 2 minutes in.

You wanna know how Jewish people own all the property in America?

I think a semester long course on Jay’s choice of visual narrative, the lyrics, the symbolism, his message about generating wealth in the Black community and how much money has been made off of Black people to generate wealth for Whites could be taught on this track and video right now. There would be a waiting list a mile long to sign up for it.

The credits open to an animated cartoon cotton field  in the style of racist minstrel animation of the 1920s. I noted how close the opening was to Warner Bros cartoons like Bugs Bunny that I used to watch daily as a girl. Jay-Z plays a character called Jay-Bo, a version of Little Black Sambo. 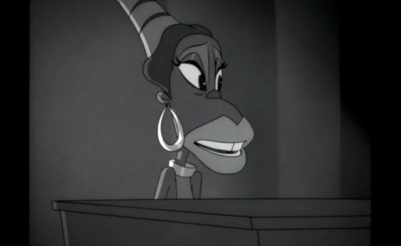 He narrates as a laid back, cool and “free” agent in this animation that was created to dehumanize, humiliate and clown Black people at a time when “Civil Rights” was a distant dream. A sample of Nina Simone’s “Four Women” plays as an animated Nina Simone plays piano in a Burlesque club and Jay raps about how credit is more important than making it rain.

Very early on you see a wooden cross being erected invisibly into the sky. It gives me chills because my body knows this is not about Christianity. Or is it? The next time we see the cross is in the background of a landscape of slaves picking cotton in unison. The cross bears down on them oppressively from on high. Is he commenting on the way in which Christianity has kept us controlled, rootless and poor?

The scene that really stays with me (I’ve only viewed three times so far) is when Jay-Bo sings the rhythmic but sobering hook, with a noose around his neck in front of a crowd of racist White onlookers who are all watching him hang. In the corner we see one little White boy turn to the viewer and smile from ear to ear.

Y’all think it’s bougie, I’m like, it’s fine
But I’m trying to give you a million dollars worth of game for $9.99

At the end of the video, Black people in the city borough neighborhoods jump for joy as Jay drops fistfuls of cash on them, a happy ending as it were. Why not? Why are we the only ones who get taught that money is the root of all evil and that we have to Sambo our way through life, turning the other cheek and pouring all of our money into a system that continues to divide and murder us?

It is masterful. No pun intended. Well, actually Jay is the master, so pun intended. Listen, I rarely try to talk anyone into doing anything I do just because I love it but if you’re Black and you don’t already subscribe to Tidal, you need to do it now. Just do it to experience this album. You can cancel anytime. But if you understand anything about the message of this album at all, at this time in Black history, then you will keep subscribing.

Nobody wins when the family feuds.

Oh, I’ll get to the album review soon…