How many ways can a person say racism is the real bread and butter of our American mythology, and in how many ways will the racists among our countrymen act out their Turner Diaries race war fantasy combination Nazi Germany and Antebellum South – states which, incidentally, lost the wars they started, and always will, precisely because there is no way those white racisms can survive the earth without the rest of us types upholding humanity’s best, keeping the motor running on civilization, being good, and preserving nature and all the stuff worth working and living for?

As a Black person, going to see an art exhibit by a Black artist means that you will be surrounded predominantly by White people who like to discuss form, line, light and composition rather than content. I’ve only gone to see exhibitions lately that are pretty hardcore in their examination and critique of the atrocities committed by White people on Black and Brown people so I’ve had to get used to tunneling through and stepping in front of White bodies, avoiding White gazes and just taking in the work without letting my feelings of disgust, anger, violence and sadness overcome me. 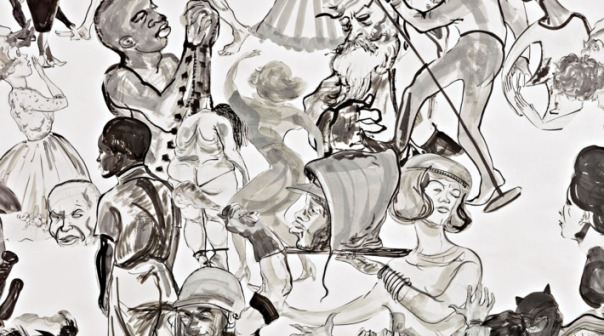 Kara Walker’s show at the Sikkema Jenkins & Co in Chelsea left nothing to be speculated on as far as what her subject matter expressed. The ugliness, the horror, the perversion and sickness of White racism, bleeds off of every piece. There were a couple of pictures I took of images, which I still cannot post on social media because they are for me, too triggering.

When I think of what it must take for Walker to get these images on the paper, mentally, psychologically, spiritually I can only hope that it serves as a form of catharsis. I don’t know how White people take in images like this casually, and I try not to preoccupy myself for too long, wondering how. My guess is that it’s the same way they can imagine that anything about America’s history as it has been taught for so many years could possibly be built on anything but lies, genocide, murder and hate.

After passing through a large room of about 5-6 of the large scale hand cut paper silhouette pieces Walker has become well known for, full of the darkest, most disturbing indictment of White Racist violence via chattel slavery and the modern day products of it I have seen since Kerry James Marshall, I came into a room of more traditional sized framed pieces filled with dark paint. The first one I looked at had a few snatches of hand scrawled words on it that were hard to make out until I leaned in close.

“You Hate Black People as Much as You Hate Yourself”

It is glaringly obvious who that message is for. There is no question of its authenticity. And it’s frighteningly clear that the truth of this statement has played out from the enslavement of the first of our ancestors until this very minute. This message I feel, is the one which White people are responsible to allow into every pore without the promise of acceptance, forgiveness, sympathy or love from Black or Brown people to keep them from the rawness and destruction of it’s sting.

Because we are beyond apologies now.

The day after I went to see the Kara Walker show, White nationalists in Charlottesville Virginia were on the march again, with lit torches chanting “You will not replace us.”

Later on Dove released an insidiously racist image of a Black woman pulling off her shirt to reveal a White woman’s face and body.

And to that I say:

You cannot replace us.

Without us you have only the mirror of your sins to reflect upon.

In her artists’ statement for this show and in her pieces,  it’s obvious that  Kara Walker is clearly fed up. She knows that showing White people to themselves has very little chance of changing anything because up until now it never has. But as Auntie Nina Simone once said, an artists duty is to reflect the times. Because time will always tell.

Thanks to social media and the Cheeto in charge,  though the times haven’t changed much, the ways in which they are being reflected is broad, immediate, often explosive, and perpetually evolving. This is only the beginning.