I was editing a fantastic blog entry for CREADnyc last week about the importance of Black female authors in Highs School. Please get your life, go there now and read it but remember to come back! LOL!

Among the 3 Black women authors Khalya wrote about, she mentioned reading Zora Neale Hurston’s “Their Eyes Were Watching God” for the first time in college.

The crazy thins is I had been thinking about that book a lot lately, not necessarily because it was among my favorite works of fiction, but because it was assigned reading in my high school humanities class and because it was the first ever book I had ever read in dialect. And I can remember like it was yesterday how quick I was to look down my uppity nose at that writing until it was made clear to be my my teachers that this book was not only worthy of cannon like status, but that it was, and is, a brilliantly written piece of literature, meant to be studied, deconstructed, theorized and revered.

As Khalya mentions in her piece, we all know what it’s like to struggle with Shakespeare, but love iambic pentameter or hate it, we see Shakespeare held in the highest esteem absolutely everywhere. And as Khalya also points out, no one has ever spoken like that. Where as dialetic is a phonetically written expression of the way real ass people talk. We hear it all the time. But we rarely ever read it. The only other example of a book written in dialect I can think of is, Trainspotting by Irvine Walsh which the film by the same name is based on. I love that movie and I totally respect that it was written in Welsh dialect but ain’t nobody got time for that! LOL! I had to watch the film with subtitles!

But back to Zora. See, when I was a teenager, I was already walking around thinking I was better than other Black students because I thought I acted and spoke the way I was taught was acceptable and appropriate. And although I hated reading dead White people classics, I never said a word in protest about it. By 9th grade I had already started reading Alice Walker, Toni Morrison, Angela Davis’ collections of Short stories and Terry McMillan and I was very proud and feeling myself about that. But that just meant I was a snobby Black chick. I couldn’t stand Donald Goines and a lot of the work that came from what was at the time,  just developing “Black lit” genre from publications such as Triple Crown. I never read Zane or Push by Sapphire because I didn’t think these writers were worthy of being considered “literature.” Even in an alternative, progressive public charter school that was very subversive in it’s approach to education, I had still developed an idea about what I considered to be good writing that was of course informed by oppressive White supremacist media. I knew what kind of writing flooded the mainstream and occupied the majority of my YA bookshelf and none of them were written by in dialect by Black women.

In America, a young Black person’s learns very early that the only rewards worth anything are the ones we get for aspiring to Whiteness and hating ourselves and one another. Racism never sleeps. Slavery was never really abolished. 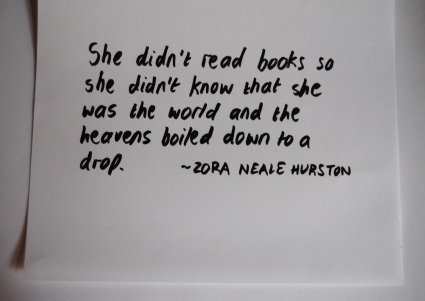 The introduction of “Their Eyes Were Watching God” in high school impacted me in ways I wasn’t even aware of until now because it was placed on the same level by my teachers with Shakespeare, Salinger and Harper Lee. In addition to Romeo and Juliet, we also read and did a class production of scenes from “A Raisin in the Sun.” We read “Down These Mean Streets” by Piri Thomas who grew up in the same neighborhood in Spanish Harlem where I attended high school. This was a rough book for me to get through as well, more because of the content than anything else but when I look back on it, I remember appreciating some it’s rawest moments the most.

As a huge fan of reading, if I hadn’t been exposed to these books as a teenager I might have tied myself to the notion that great fiction and literature could only look and sound one way or only be produced by a certain class of Black people. The fact that most of us are not exposed to these writers until college is no coincidence. Self hatred in Black people is a seed planted by institutional and systemic racism that historically has always been bent in one way or another on creating slaves.

Thanks to resources like CREADnyc.com, which I am continually proud to be a part of and the brilliant educators and writers there as well as Decolonizing Education Publishing which was created to empower Black children with sociopolitical consciousness and yes, thanks to the Cheeto in Chief, those who have dedicated themselves to Black revolution are providing integral entry points to the dismantling, diminishing and dencentering  of White supremacy.

Much like Janie, in “Their Eyes Were Watching God,” Black people are the world and the heavens boiled into one drop. We don’t need to conform, convert or assimilate in order to be worthy of love, equity and humanity. We never have.