So after months of thinking about it and agonizing over it, I finally shaved my head  bald a few weeks ago. Though I do feel super liberated and in love with my bald head, I’ve had my share of insecurities, particularly since I’ve been challenged with some hair damage over the years but I’m kinda into moving past that right now and healing rather than harping. It has helped a lot to have the full support of my husband whose clippers I used to shave my head initially. He finished it off in the back and then smartly suggested that I go to the barbershop to have it lined up and neatened and stuff.

Shout out to Denny Moe’s in Harlem for never making me feel weird, awkward or shamed for coming in to cut my hair short and always making me feel welcome because I have heard some bad stories about the terrible treatment of women of color going to barber shops to have a big chop done. As if we don’t have enough problems!

Here are some things I have experienced since I shaved my head.

But here’s what I don’t wanna do. I don’t wanna act like shaving my head is really that big a deal. It’s just like when locking your hair became trendy and cool in the 90s. It doesn’t make me deeper or more evolved in the larger scheme of things. It’s hair.

It’s really the system we live under that makes us over identify appearances with who we are inside. The only truly revolutionary thing I can claim has happened for me as a result of choosing to shave my hair is that I care so very little about what anyone thinks about it. I choose to model my shaved head confidently but also try my best not to let the action define me for myself anymore than I might have let my hair, extensions or wigs. I am conscious that this has an affect on how others see me as well but I’m not trying to prove anything to anyone else. I seek my own approval only. 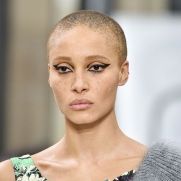 There are a bunch Black women I admire who have shaved their heads and it’s wonderful to be able to look to them for inspiration, support and pride. There’s even an IG community that my BFF put me on, called The Baldie Revolution which I now follow. But as a woman, when you shave your head, self acceptance is key. Your head is not like anyone else’s just as your entire physical being is not like anyone else’s. It also makes me see how deeply our society, despite all it’s “individuality” marketing is really about sameness and fitting in, when in fact, I’m pretty certain most people never feel like they fit in. I certainly never have. So for me it’s also a way dropping the adornment of hair or wigs (which I still love) and just seeing my face as it’s own unique canvas. I was also just really running out of ideas for how I thought I should look and feeling like I wasn’t really “seeing” myself, although metaphysically I know that there is no one true self in any physical reflection. As Ru Paul says:

One of the many things I love about wearing my shaved head is the affirmation and support I get from and give other woman of color I see who have done the same. This morning, one of the Black women at the Pret counter where I get breakfast every day pulled up her hat to show me her bleached blonde low cut. I love it and I was honored that seeing my shaved head made her feel inspired to share hers with me. I experienced that kind of connection years ago when I took out my extensions and decided to go natural for a time. When we see one others model looks that perhaps our family, co-workers or community have hated on or made us feel bad about, we gain strength and confidence in expressing authentic parts of ourselves rather than what we’ve been pressured to perform as. We allow for broader definitions of what beauty can look like. And it’s a wonderful ever evolving exploration. To discover that beauty is so much more than what we’ve long been conditioned to believe.

It’s deeper than our scalps.

We’re only just beginning to scratch the surface…

Yeah, that was a trash pun.