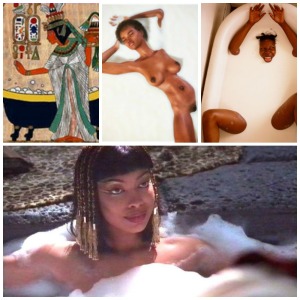 So Tuesday night I treated myself to the June Full Moon Magic Bath as instructed by Letgoletgoddess. I’m all about a soak in the tub and have been since I was little girl but I have never added milk to my usual recipe of dead sea salts, the occasional Lush bath bomb and bubbles. I’ve long been titillated and enchanted by images of submerged limbs, visibly cut off at the surface of milk baths but never tried it myself. This one called for goat, coconut or cows milk. If you didn’t already know, I’m in love with the coco, so I picked some up in my neighborhood after work and added that to a hot bath of dead sea salts and piece of a Lush cocoa bath bomb with gold glitter that just happened to create a pleasing Oshun colored gold when released in the water. I was super excited to get in and invoke some magic full moon manifestation.

Being submerged in water has always had an immediate sedative effect on me. And this time the added effect of the milk produced another amazing feature.

I have always been fascinated the shapes that naturally transforming elements make, in clouds, in water in soap bubbles, basically in anything that is constantly undulating moving and turning into something else. I’m not sure this would have happened if I used the half a gallon of milk that the instructions called for but I used what I had which was less than that, and I like what happened.

Last winter I was vacationing at house of good friend on Woodstock with my husband and we were hanging out on the deck in the back. I saw what looked to me  like the shape of a woman in the clouds. She was definitely a mystical woman, a woman who knew her power. Often I wonder if the things we sometimes see in transforming natural shapes are not also within us. Sometimes other people see them too. Sometimes you have to show them. Sometimes they never see it.

Well I saw a lot of interesting patterns the milk made in the bath and they were all beautiful. Your bath water can become such a sacred thing and all that you experience in that space is a reflection of your state of mind, your hopes, fears, dreams and wishes. Plus it’s always made me feel so sexy and sensual and feminine to soak in a bath. It may be one of the first things I ever did as a young woman that made me aware of my body in a very positive affirming way.

I fantasize occasionally about one day soaking in an a deep marble tub with feet like the kind they used to have in the old days or one of those deep copper ones. Oh, I think I could stay in one of those all day!

So I will definitely be adding milk to my future baths, both for ritual and relaxation. The idea of magic manifestation through a sacred bath feels very primordial and instinctive. If you’ve never done it before and you love water as much as I do then bust out a candle, scrub your tub, gather some sweet scents and tastes, start a gratitude list.

It will make you feel good.