I was scrolling through my IG feed recently when I found some swimwear I found attractive because it was constructed similarly to the last swimsuit I purchased over a year ago at American Apparel. Ever since I stopped being a size 3-4 in my late 20s I have needed a one piece that carefully reveals my mid-drift without also revealing lumps and bumps and a tummy which I have not always been loving successfully. This bathing suit from AA does that very well and it’s also backless which is non-negotiable in a bathing suit for me. I want to expose as much skin as possible to the sun without being naked. I would prefer to be naked but…you know…because America…

So anyway I find these swimsuits made by a company posting on IG and get really excited because there are some brown girls wearing them but of course the model on the site has really tiny boobs which is fine and all but I need to see a sister with big breasts in them because I have big girl breasts. I used to have small breasts too and I really liked them because I could fit into almost anything. But as I mentioned, my new breasts came in like a lion during my late 20s when my speedy metabolism screeched to a halt and now I have bigger breasts than I ever could have imagined. And it took some time for me to really get used to them and love them and not see them through perve-o-vision, ie., little white man in my head gaze. I spent so much time being thin and waif like that it’s sometimes hard for me to carry my DDs with  pride and I deeply admire the beautiful sistahs I see who do because I can see that it’s all about the self-loving attitude. But now that I am bigger everywhere, and I’m still obsessed with being being beach ready (’cause I love me some beach!) I realize that there aren’t many bathing suit ads that feature Black women with large breasts.

And it’s annoying. Because my DDs are super sexy and need love, support and proper adornment.

I texted my good girlfriend Soulsistah4real like “why do they always have chicks with no boobs modelling swimwear.”

Shit! She’s right! I used to have what Western society would call model boobs. And now I have porn boobs. And when I think about what the average Black woman looks like and the body that average white women aspire too, I see how sexism and racism have played out their perversions and pathology on our bodies for hundreds of years. They have made us look at ourselves through the eyes of the oppressor with shame, disgust and self hate. And it shows up in so many ways, the least of which is in the way that many lines of women’s apparel do not factor in our body types except when it comes to sexually explicit modes of exploitation and commerce.

I look to alternative ways of seeing ourselves that decolonize this notion of objectified and dis-empowering pornofied images of Black women’s bodies.

Let me be clear.

I love nudity. I always have. I think that women are beautiful just because they are women. I love the soft, the curvaceous the round, the sensual, the deep, powerful sacred unseen energy behind what is seen in nakedness that informs what is transferred to those lucky enough to see. But whomever is behind the creation of the image is either a co-collaborator with the subject or someone who subjugates the meaning of the woman in  the finished product, resulting in the negative and self hating attitudes that are so prevalent among women today. 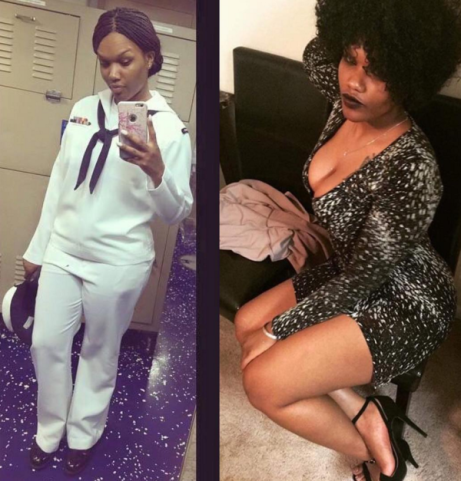 I try as much as I can to subscribe to images like those made in the vein  of the side by side pics Black women have been taking of themselves to depict the duality that exists in us to be taken seriously in both the conservative and sexual realms. We have to take back the control over the ways in which we see ourselves or risk forever being demeaned by eyes that consume us, demean us, want to emulate fragments of us but never see our beauty.

I know we can.