While creating some flyers for Soul Sistah Series next upcoming event, my sister friend and co-worker came up behind me and made one of those sounds we make when we see something that makes us go Ooooo!! Like when you see someone naked unexpectedly. The words “Yoni and You” caught her eye and while she initially responded coyly the way most women are conditioned to respond when we see words describing intimate body parts, but she was also intrigued. She is someone who is open to the concept of learning and dialoguing about issues which affecting our bodies in ways that unify rather than divide us.

When soulsistah4real first told me about “Vagisteaming” for the first time last year, I was more than skeptical myself. Since then, Vagisteaming has been on the rise in trending discussions about female health. My sister friend told me that she heard about it from a certain female celebrity whose name I’m sure we can guess and whom I will not pay more lip service to here.  I told C. that this was not a new practice but an old one that women have done since ancient times to condition and heal themselves as well as enhance their sexual pleasure.  She happens to be on the Soul Sistah Series email list so I told her to check her email for our latest newsletter which talks about our first event, “Manicures & Mimosas” as well as explaining the history and the benefits of vagisteaming.

More ohhs and ahhhs came from my friend, but this time they came from joy, interest and excitement!

I’m not perfect. I’m always surprised by how unconnected I am to my own body and spirit, even when I think I am. But I never question the moments when I do find myself fully present in my body, trusting the divine energy that connects directly to my heart. And I know that as women of color, there is no better time than right now to start having more open and transparent conversations with each one another which will hopefully lead to an understanding that the bodies’ connection to pleasure is also a connection to health and well being. Reclaiming the bliss that comes with embracing contentedness to the five senses is part of the essence of life. 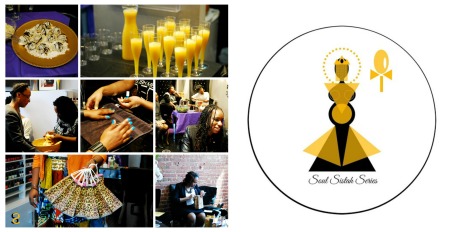 After “Manicure & Mimosas,” The Soul Sistah Series very first event this past Sunday, I had a woman come up to me and say with a beaming smile, “I’ve never seen so many women with natural hair.” Another woman told me it was exactly the kind of day she needed after the kind of week she’d had. Another women told me how refreshing it was to be able to express her views about life in a place where she didn’t feel like she was crazy for saying so.There were so many women who expressed how happy there that they came and after a while one thing became clear to me in addition to everything else.

Other women of the Diaspora want this space to exist as well as Soulsistah4real and I do.They really do! And you know what? That makes me feel less crazy for thinking this could be possible. It also gives me great *pleasure to say that our next Soul Sistah Series event in May will be twice as amazing, filled with as much pampering and enlightening challenging discourse as “Manicures and Mimosas” was.

*what brings you pleasure?

It doesn’t feed you”

The world became aware of Lupita Nyongo in her break out Academy Award winning role as a slave named Patsey in “12 Years a Slave.” But it was her Essence award acceptance speech that really defined what Lupita has come to represent for women of color everywhere. When she shared the letter she received a letter from a young Black girl struggling with the perceived burden of her dark skin, Lupita was prompted to share her own experience being taunted and harassed because of her dark skin. She spoke of the self-hate that lead to destructive aspirations to lighten her skin as well as her journey toward self- acceptance with help from words of affirmation from Oprah, her mother’s love and compassion and the emergence of the dark-skinned model, Alek Wek.

This was an unforgettable, timely and touching moment in history, a moment when dark-skinned Black women watching everywhere were joined in the validation of their own struggles with colorism and also in gratitude to Lupita’s fearless, loving and beautiful testament to truth about beauty. Wherever she appears in print gracing fashion magazine covers and larger than life Lancome ads or on screen, lively, intelligent and sparkling with joy and curiosity, Lupita represents to young black girls and Black women alike what Alek Wek once did for her. The beauty of self acceptance that exists within is what illuminates what we see on the outside and no shade of Black, Brown or shades in between should ever be exempt from the definition of beauty.